The Earthsea Quartet is the four books from Ursula Le Guinn about the world of Earthsea, where mages keep the peace and only certain men are able to talk to dragons. A world of fantasy and adventure, the series appeals primarily to teenage audiences but young adults can also find a lot of enjoyment between the pages if they like that sort of high fantasy to begin with. 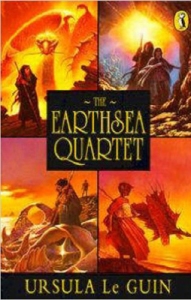 All four books revolve around the central character of Ged – known as Sparrowhawk to those not blessed enough to know his true name. Starting out as just as young boy with a power that seems too great to be taught, Ged must learn lessons in both magic and life, understanding that his pride has a price to pay and that his power may not always be relied on in troubled times.

However, other stories are strongly interwoven. In fact, Ged becomes the secondary character in three out of the four books. While he still has a strong presence and the story is still sort of his own, the other books tell it from a different point of view. The second book follows the story of Tenar – a young priestess and the Chosen One for her religion, doomed to be a servant of the Gods for her whole life. But when she encounters a young mage stealing, her life is turned around.

The same is true for a young prince, Arren. Sent to find answers for why the magic of the world is failing, he finds himself on an adventure with the archmage, learning things about not only the world but himself he never thought he would and having his destiny being placed on a track that could change Earthsea forever.

The final book returns to Tenar, but her life as a grown woman with a family of her own now.

All four books are engaging and the characters heart-felt. Due to the way the narration changes to another point of view for each book, you don’t feel like you are constantly reading about the same character all the time. It also means that time has moved on quite significantly between each book and those gaps do not have to be explained because it is no longer Ged telling the story.

For people who enjoy tales of magic and dragons, adventures and destiny, this is definitely recommended. Personally I found them a touch easy, but that was through reading them at a later age than the intended audience. But that aside, I still thoroughly enjoyed all four books.

Le Guin writes with a confidence of knowing her world and her characters, and the reader can’t help being drawn into that. You want them to win, to find the answers they are seeking because the characters are loveable. They are flawed – and that flaw tends to be the focus point of the book – but it stops them from becoming too pretentious or annoying.

A truly heartfelt series, enjoyable from beginning to end. A certain recommendation for those dipping into the fantasy world.