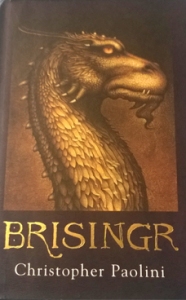 Brisingr is the third book in the Inheritance series by Christopher Paolini. Named after the word for fire in the Ancient Language, the book is certainly an inferno of emotions, excitement and just the consuming desire to read on, much the same way a fire would rage.

Eragon is left in a turmoil after losing to Murtagh, not only knowing his friend-turned-reluctant-enemy seems to be stronger than naturally possible, but that they share the same parentage; they are brothers. Weighed down by the knowledge the task ahead to defeat the evil spreading through the land, Eragon must learn to grow as an individual as well as a Rider. Twice in the book – once through Eragon’s own sacrifice and once because he is acting under orders – he is parted from Saphira and must learn to protect himself without having a fearsome dragon at his back.

However, just because things seem to be impossible doesn’t mean there isn’t hope. Roran’s arrival at the Varden has occurred just in time, with Nasuada finding herself with a capable warrior now at her disposal with the drive to rid the land of evil single handed if that is what it takes to keep his newly freed beloved safe.

The dwarves must crown a new king – an event Eragon has more of a hand in than he wants to acknowledge – and Oromis and Glaedr impart knowledge onto Eragon that not only gives him some weapons he needs in order to fight this war, but helps him to find peace of mind as well.

Due to the complex development of the plot, the narration broadens out even further. The previous book had things from Roran’s point of view as the two cousins began a journey to be reunited. Now, however, Saphira and Nasuada also become part of the narration as the tale gets bigger. It keeps the book refreshing to hear more than one voice, and especially helps things not to be restricted by Eragon’s still somewhat limited view and understanding of the events taking place.

Not only does it broaden the narration, but it changes the writing style in places. Speaking from Saphira’s voice is a completely different style compared to that of a human. While it is effective, it does seem limited as to what words are changed in order to have it from a dragon’s perspective. Nonetheless, it is an effective way of keeping the reading engaged.

New allies are formed and risks are taken for the good of freedom. Not everyone, however, can survive such a battle and it is with heavy hearts the Varden continue to strike back against the Empire in order to ensure the freedom of the whole land.

The third book is just as engaging and emotional as the previous two. It was refreshing re-reading it this time around to know that I have the next book waiting for me rather than being left on a cliffhanger as to what is going to happen next. Paolini knows how to truly transport his audience.