The great thing about being a film student is the opportunity to see films that are a little different. It’s even better doing it an exciting atmosphere with the possibility of seeing someone famous at the same time.

Well… I didn’t see anyone famous (at least, no one that I recognised), but there is nothing more exciting than being given the chance to see films at the Cannes Film Festival.

As a final university trip, a group of about forty students had the chance to attend the festival. Our first day there was last Tuesday. It didn’t quite go according to plan. We weren’t at the actual festival, but outside of it at Cannes la Bocca. Unfortunately, we were in one of the two cinemas that doesn’t have English subtitles. After watching one that was effectively a porn film no one understood a word of, we then found out the other screenings had the same language problem. We lost out on films that day. Instead, we travelled into Cannes itself and had an explore but didn’t manage to get into any screenings. We did, however, see some pretty incredible yachts that we could only guess belonged to some of the stars because they were so huge and expensive. 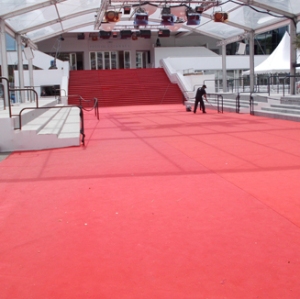 The main day at the festival was Thursday. Before attending, I didn’t understand how it worked. It is lots of queueing. You get a generic ticket that gets you into one film. But then you have to queue for hours to see if there is a chance to actually get into the screening. I was fortunate enough to make it into two – hopefully will be able to get some reviews written up for when they are released if they make it over here. They were complete opposites of each other but both equally good. It was nice to have the contrast between a laugh out loud film and an intense one. The second film also had the cast and crew present in the screening which gave it an amazing atmosphere. 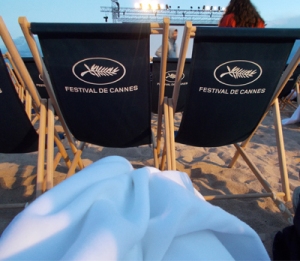 After the films, it was a quick look to see if anything was happening on the red carpet. Unfortunately there wasn’t – even though people had seen Michael Caine the night before (from a distance!).  Then down to the beach for a screening. You are given a deck-chair and a blanket and snuggle yourself up (it didn’t make a difference, it was still absolutely freezing) and watch the film. I was able to watch the beginning of Apollo 13 on the beach – pretty fantastic. The last train time meant I was only able to watch about half an hour of it, but I was so cold I couldn’t have sat there for longer anyway. Nonetheless, I wouldn’t have changed the experience for the world.

While it might not have gone exactly the way it was planned, the festival was amazing and it was a fantastic experience. Has anyone else been to film festivals of any sort? Let me know!