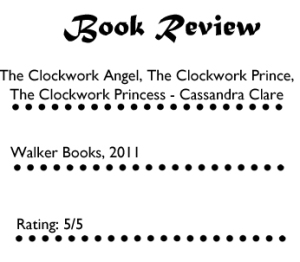 Plot: Moving from New York to London to be with her brother, Tessa Gray has no idea what is waiting for her when she gets there. A world of demons, nightmares and Shadowhunters. Her very humanity is called into question when Tessa discovers her shape-shifting ability and she must fight to understand herself to escape the deadly Mortmain.

Battling against his clockwork army, Tessa’s heart is divided. But Will and Jem are not just best friends, they are parabatia. Their bond is stronger than Tessa understands. Is the love shared between the three of them enough to survive this onslaught?

Quote: `”Half one thing and half another,” Tessa said. “Like me. But you know you’re human.”

Jem’s expression softened. “As are you. In all the ways that matter.”`

Opinion: A fantastic trilogy of books from Cassandra Clare. The Infernal Devices is a prequel to The Mortal Instruments, set in London in the 1800s. The plot is gripping, the characters well developed and the world Clare has built is breath-taking. Clare has a way of drawing the reader in, of immersing them in her story so when the trilogy has been completed, one has to find their way back to the real world in order to recover from the emotional whiplash.

The plot is relatively straight forward: good guys have to win against bad guys. But there is so much depth to the world of the Nephilim, so many twists and turns along the way it becomes so much more than that. Clare cleverly blends her two series together; small details in this world become more prominent in The Mortal Instruments despite the gap in time. On more than one occasion I gasped out loud or suddenly sat up due to surprise and shock at what was happening. There is nothing simple about this world.

The character development is also fantastic. Tessa remains a strong, likeable and relatable character the whole way through. The relationship between Will and Jem is described perfectly. Their characteristics and flaws make them unique yet Clare has a way of making her characters likeable. Will deliberately is harsh for the first two books and yet the reader never once wants to turn away from him, especially not when the reason why is discovered.

Clare’s world-building is phenomenal. It draws the reader in and holds them captivated in the world she has created. There are not many authors – even in the fantasy genre – that do this as successfully as Clare manages. Her writing is the inspirational type due to the way she can successfully manipulate emotions throughout the whole series. The final book in the trilogy, for example, had me alternating between laughing and crying the whole way through.

Technically, the books are targeted at a young adult audience. However, the thoroughness of her writing means enjoyment can be found at any age. As long as you like magic, tension, adventure, excitement, love and loss, this book has it all. I’m now eagerly awaiting her next ones.