Life is a strange and bemusing thing. I’ve spent about ten months of this year not feeling well and worrying about what the future is going to hold. Then over the last month, I’ve felt better and have a job. Although it is not the sort of job that will last me forever, gaining the crucial experience and just having one is the most important thing right now.

And now I have been there for over a month. Six weeks this week, in fact. How has time gone that quickly? I have to admit I am still absolutely exhausted by the commute, but I’m hoping that it won’t be long now before I can start focusing on other things around work and start to feel like I’m properly taking control again.

So while I’m busy trying to plan my life, let’s take a look at what the plan for this month is.

Films: When I first started planning this month, I really couldn’t work out what I wanted to watch. But then fate lent me a hand and I think I’m sorted now.

The Hunger Games: Although I’m hearing mixed reports, I can’t not see this final film and see how it is brought to a close. Looking forward to it even if I am a little dubious, I must admit.

The Avengers: Lovefilm have finally decided to play nice and send me this film out. After wanting to see it for such a long time, I only hope it is as good as I hope it will be.

Tomorrowland: I’m intrigued by this film. I have a suspicion it might irritate me, but I’m looking forward to being proven wrong.

This month has been rare for me in the sense there have been a few things on television that I’ve been watching. The Last Kingdom and Once Upon a Time have both been airing, so there shall be reviews on both when they come to an end. 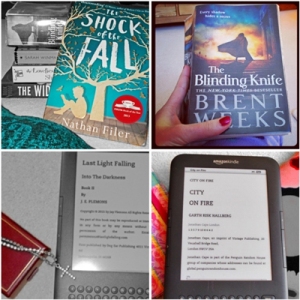 Books: Now I have a long commute, I’m finally following my schedule for books. So what’s the plan for the next few weeks?

I have to admit that I’m trying to catch up with some of my netgalley reads this month, so I have both Stalked by Flames and Our Endless Numbered Days waiting for me. I have no expectations for either, so hopefully they will prove to be enjoyable.

I am currently reading Children of the Darkness for the Bookbear tour and am enjoying it so far, so hopefully will have a decent review next week.

I also want to read The Broken Eye by Brent Weeks. Having enjoyed the first two in the series, I’m really excited about reading this book and just have everything crossed it doesn’t disappoint.

So that’s my plan for the month. I’m excited for Christmas (partly because I get time off work) and all the festivity that this month is going to bring. What about you, what have you got planned for this month?