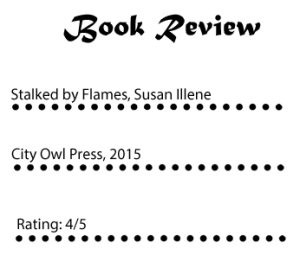 Plot: When two dimension collide, dragons appear and start destroying everything. Humanity races for shelter. When Bailey is informed that she is a dragonslayer, it seems laughable. But she can’t deny the urge to kill when faced with a dragon.

Aidan is a dragon. Only a good one. Who can shape-shift into a human. He knows that Bailey is the only chance his clan has if they are to fight the pure dragons. Prejudices must be put aside if the two are to join forces and save the world. It would be easier if they weren’t attracted to one another.

Quote: `A heat-seeking missile would have been preferable but no one had told me we were about to get invaded by mythical beasts, so I didn’t have one on hand.`

Opinion: The book caught me within the first few pages due to the humorous narration style that is presented to us via Bailey’s character. When I realised it was going to be based around teenagers, doubts set in. I’ve read too many cliché young adult books recently. But I was wrong to doubt – the book was thoroughly enjoyable the whole way through.

The plot was certainly different and refreshing. Shape-shifting dragons. Colliding dimensions. Fate of the world resting on a skinny girl who wants to run a business, not fight dragons. The absurdity of the situation was not lost on the characters and their reactions to unfolding events were realistic and enjoyable to read.

The characters themselves were good. Bailey and Aidan are the two main characters and their separate narrations allowed each to be well-fleshed out. They weren’t without their tempers and their flaws, but they worked. They had their loyalties and their doubts and the way they sparked off each other was good.

The minor characters also all played their part well. They were more than just background characters to give Bailey someone to fight for – the reader cared what happened to them through Bailey’s reactions.

There was the typical young adult love triangle. But it didn’t play out the way I thought it would. Bailey appreciates both men in their own right, but there is no undying declaration of love to either (or both) at any point in the book. Having read too many young adult books recently, it was nice to see one that stayed grounded in reality rather than being swept away with the fairies. Or dragons… One of them.

Stalked by Flames rekindled my enjoyment with young adult novels. They don’t have to all be about undying love and forbidden romances. Or if they are, that does not have to be the main plot. This showed that you could have an exciting and gripping story with the romance element taking a back seat – present but not dominant. For that reason alone, I would love to thank Susan Illene for not conforming to the stereotypes of young adult books and focusing instead on the plot.

It would be a recommendation from me. A surprisingly enjoyable book.