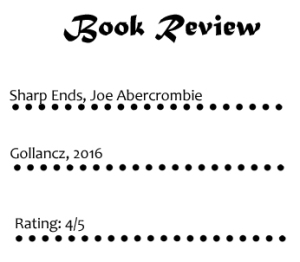 Plot: In the Circle of the World, there are many characters fighting to make their way in life. Some are thieves (the best thief in Styria, thank you), while others are fighters (Bethod, Glokta, the Bloody-Nine all began somewhere).

This is their story. Their snap-shots at life around the events that occurred in The First Law trilogy. Some are better off, some worse. All have their story to tell and with Sharp Ends, their voices can be heard. If you want to laugh or grimace, or even just get to know the characters better, this is the book for you.

Quote: `The flatbowman raised his weapon, candlelight glinting on the sharpened tip of the loaded bolt, as several other thugs burst from the shadows brandishing a selection of unpleasant looking weapons. Though what weapons look pleasant, Shev reflected, when brandished at you?`

Opinion: Having only just finished The First Law trilogy, I knew as soon as I saw this book that I had to read it, and fast as well. Abercrombie has a way with words – not many authors have the skill to make you both squirm and laugh out loud within the space of a paragraph. This book can!

The first story – Beautiful Bastard – and the last – Made a Monster – were definitely my favourite because they were based on characters that we already knew, just how they were before we met them in The First Law. Seeing Glokta in all his arrogant glory was entertainment and its best while getting the chance to know Bethod better compared to the trilogy (and seeing how crazy Logen could be, in case you had forgotten), made it entertaining.

Following Shev’s story throughout was rewarding – as her tale came together, it felt like we had a mini-novel based just on her. It did, however, get confusing at times as to who knew who and what order events were happening in. The names were similar enough that I couldn’t always recall if we had met certain people before or whether their story was new.

Abercrombie’s writing is pure entertainment. There is no other way to describe it. While, just like the series, there were certain parts that had me grimacing because they were quite extreme, there were other moments that had me laughing out loud. He works humour into crudeness, goriness into amusing anecdotes and all the while is creating a far-fetched and dangerous world that is believable. Anyone who can juggle these things knows precisely what he is doing.

It’s hard to judge short stories because there isn’t the issue of continuity or pacing the same way as in a long novel. But the stories did feel the right length. Some were longer than others, but all wrapped up their tale in an effective way that made you feel for the character in all the right places before moving on.

If you’re a fan of The First Law, or even Abercrombie’s other works, then you definitely need to check out this new release!