Plot: Winter is no longer coming. It has arrived. And the citizens, lords, ladies, kings, queens and everyone else are paying the price. Death and destruction once again rule in Westeros while across the sea, a queen is determined to conquer the world.

But not everything is dark and gloomy in series 6 of Game of Thrones. New and old friendships are forged and the importance of family becomes stronger than ever. With the stakes rising and the dangers beyond the wall getting closer and closer, bonds of loyalty and love are put to the test in order to survive. 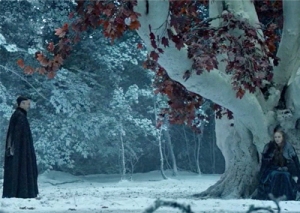 Quote: Who should the North rally behind? A true born daughter of Ned and Catlin Stark born here at Winterfell? Or a motherless bastard, born in the south?

Opinion: Even with a series of books to follow, there are times when some series feel as if they have run their course and should bow out while they are still strong. When series 6 of Game of Thrones began, that is how I felt. The plots were becoming far-fetched (to an unrealistic point rather than how they have always been) and the characters were so spread out it became hard to keep track of who was who.

But by halfway through the series, I had changed my mind. For the first time in several series, characters were actually coming together. A few of the Starks were reunited and the Greyjoys set sail to join Daenerys. As the characters come together, it becomes easier to keep track of who faces which threat rather than everyone fighting personal battles. Not to mention that with friendships and families reuniting, there are some pleasant exchanges rather than everything being guts and gore.

That doesn’t mean, however, the show has eased up on its graphic scenes. For the majority of the series, I was alright. But episode nine had me looking away and squirming as the whole episode was just one big battle. This occurred last series as well – Jon Snow has an entire episode to himself where he fights against impossible odds for the entire time.

There didn’t seem to be as many deaths of main characters, until the last few episodes. One death really annoyed me. No spoilers will be mentioned, but it involved a character barely seen for two series (and very little before then), brought back and killed off. It did have a point to it, but considering how little that character had been used, it was irritating.

The series ended with quite a few changes taking place, which was refreshing as it hopefully hints towards an epic series for number seven. Despite not having read the books, I understand the series has drifted away from them, so I am interested to see where they will take the next series and whether any of it will remain true.

Despite an unsure beginning, I enjoyed this series once again. Regardless of the deaths and gore, Game of Thrones still manages to grip me.