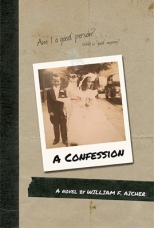 An unknown narrator has a confession to make. In fact, he has several, and you, the avid reader/listener are going to bear witness as he bares his soul. From childhood bullies to drug addictions in his twenties to failed attempts at love, this is a man who has a lot to get off his chest.

You’re not going anywhere, right? Good. Because there are plenty more confessions coming out and at the end of it all, a decision has to be made. After all, all his secrets are out in the open now, so can the avid listener walk away?

Did I enjoy A Confession? That is a very good question. It caught my interest and held me the whole way through, but it’s difficult to say whether enjoy is the right word. It was something different, something unique and for that reason alone, I saw it through to the end.

The narration style is why the book is why the book is unique. The narrator – an unnamed man in his mid-forties – appears to be directly engaging the reader for the first part, including going to make sandwiches and drinks. While I’ve read books that speak to the reader, I had never seen it in such a direct way. As the book twists and turns, you discover he’s not necessarily talking to you and things are not what they seem (no spoilers here!).

My issue was it was very hard to feel anything for the character other than wanting him to stop whining. He’s a guy who falls on his feet after his brother leaves him everything, including royalties that set him up for life. He lacks empathy and even when he is in love, his conduct made it very hard for me to connect to him and feel anything.

A Confession is basically one long rant about the things that have gone wrong in his life, mainly through his own fault. Long passages about God and charities and how we know if we are good or not lost me a little as they seem to just ramble on for a long time. I know I like rambling, but this was just too much!

So saying, I did get through to the end and there was an interesting twist that kept me engaged until the final pages. Even then, it ends on a nice cliffhanger to keep our intrigue about what could possibly happen next!

William F. Aicher creates an interesting novel with a unique perspective that I haven’t come across in many novels. While I’m glad to have read A Confession, I don’t think I’ll be re-reading it for a while. It gets you thinking about your motives for actions though! 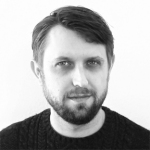 William F. Aicher is the author of the upcoming novel, A Confession, and two previous books. He works a “day job” as the Chief Marketing Officer for online sheet music retailer, Musicnotes.com and is also a champion of intellectual property rights in the digital age. He graduated from the University of Wisconsin-Madison in 2000 with degrees in philosophy and journalism and lives just outside Madison, WI with his wife and three sons.