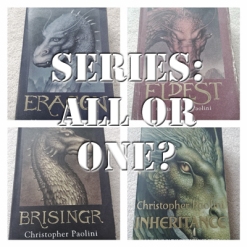 The final book is about to be released. The battle won! Or lost. Characters finding love, destroying enemies, vanquishing their fears, embracing their destinies… It’s all there in the final book of a series.

Can you remember how you got to that point?

Do you re-read the previous books first or not? 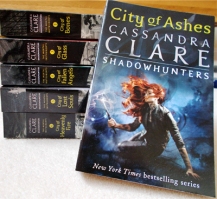 Previous posts will have shown that when it comes to re-reading, I’m all for it. There are books (and series) that I read every year if I can. As I write this, I’m pointedly ignoring The Mortal Instruments under my bed or that I have yet to pick up Fangirl this year (there is still time!).

When it comes to series and new releases, however, do I re-read the whole series or just go into the final book?

In fairness, it all depends on timing. For example, I have recently read The Last Star by Rick Yancey (review coming soon!). It had been about a year and a half since I read the first two and I couldn’t remember the details.

With reviews in hand and knowing the books wouldn’t take too long, I got them out of the library and re-read them. The queue for the final book was so long that I had plenty of time to order the others in, read them and take them back.

The Blood Mirror by Brent Weeks, however, is a different story. It has been a year since I read the first three and I have to admit, with the amount I’ve read since, I know some of the details have slipped my mind.

But all three of these books are 600 pages +. Bit awkward for a commute and too long for bed-time reading! I am going to go into this one blind, hoping I remember what happens.

If I have the time, I do like to re-read the first ones, or even wait until the whole series is out before tackling it. I think you get more invested in the characters and the plot when you don’t break away from that world.

Practicality often wins out though. If I have already reviewed the first books, re-reads have to be slotted in around new reads. Tackling the whole series again could make a huge difference as to how long you have to wait for the final book – possibly long after the release date.

If an author has done their job probably, events of the previous books should come back as soon as you open the first page. Sometimes there is even the helpful “previously” chapter at the beginning to give you a recap.

In an ideal world, I’ll read a whole series together. But not if it delays getting hold of a book I’m desperate for.

How about you? Do you read a whole series at once – or re-read the previous books when the next instalment comes out? Or do you take it one book at a time as they are released?

2 thoughts on “Book Series: All or One?”