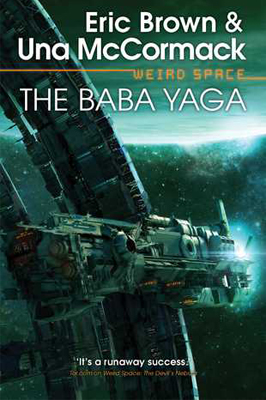 Goodreads Synposis: The growing threat of the Weird has driven the Expansion to paranoia and oppression. Mandatory testing for infection is introduced, and the colony Braun’s World – following reports of a new portal opening – is purged from orbit, at an unimaginable cost in lives.

Delia Walker, a senior analyst in the Expansions’s intelligence bureau, protests the new policies and is drummed out. Desperate for a sign of hope, she charters the decrepit freighter the Baba Yaga and heads into Satan’s Reach, following rumours of a world where humans and the Weird live peacefully side by side.

Hunted by the Bureau, Walker, her pilot Yershov, and Failt – a Vetch child stowaway, fleeing slavery – will uncover secrets about both the Weird and the Expansion; secrets that could prevent the seemingly inevitable war… 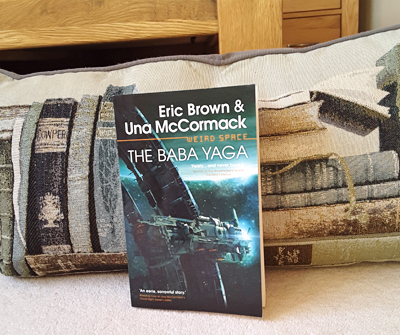 The Baba Yaga is the 3rd in the Weird Space series, but the first I have read. There were elements that I imagine made more sense – the threat of the Weird, the war with the Vetch etc – if I had read the first books, but it didn’t deter from the story. Reading the previous books isn’t necessary!

Walker is a cold-hearted practical woman. She gives up everything upon discovering she is pregnant, but is logical and detached about what is happening to her. It’s the other characters – Failt (a runaway Vetch slave), Maria (a young mother on the run) and Larsen (her doctor/friend) – who bring the warmth out of her and make her a likeable character.

Failt was my favourite character. He blended together childish innocence with the wisdom of a slave who had suffered too much to still be naïve. He drew the best out of Walker and was accepted by the majority of the characters. Heyes was so sarcastic and refused to accept any of Walker’s rubbish that she was a close second for favourite. 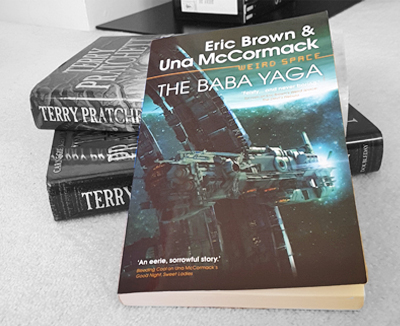 Yershov was my least favourite. He had no true development, even if helping to protect Maria meant I thought he was going to change. I hoped he would become indispensable and the opposite happened. I wanted more out of him, more to his story, but it never came.

The pacing was steady throughout, with enough danger lurking in each chapter that it kept the tension going. I think the opening might be stronger for people already engrossed in this world but it didn’t take me long to figure out how it all worked. There were the clear good guys, the clear bad guys and some shady characters in-between to keep you from falling into a false sense of security.

It has taken me a while to get into science-fiction novels but I thoroughly enjoyed The Baba Yaga. It gave me my reading buzz back and I couldn’t put it down, meaning it was certainly ticking the boxes. An enjoyable and fun read.

One thought on “Book Review: The Baba Yaga”