The last time I wrote this post was back in May, and the only thing it did was to lament my lack of progress. Now that I am trying to get myself writing again, I thought it was time to put some thoughts down on paper.

Since my MA finished, I’ve been attempting to spend time focusing on the novel again. It’s always been my dream, so I refuse to abandon it just because I’m job hunting in a different direction now.

Ironically, my first step to getting back into it was to delete a load. I had been writing it roughly, rushing scenes despite having been excited about writing them. I knew editing wouldn’t fill in the gaping holes in the plot and it was such a big section, it was ultimately easier to delete it. I say easier… it was horrible hitting the button but I knew it had to be done. 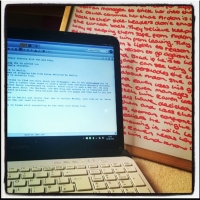 Once that was gone, I wasn’t sure where to go from there. I had some character changes that I wanted to make and knew I had to implement them from the very beginning. I also had to figure out exactly where the plot was going to ensure I didn’t have a repeat performance and having to trim it back again in order to move forward.

Technically speaking, I haven’t actually made progress in regards to moving the plot on. What I have been doing, however, is re-reading and editing. I know, again. I can see the eye-roll from here. But it meant I could start to work those changes in from the start and make sure I’m setting up my main character the way I want him to be. The hope is by the time I’m adding new chapters on, his characterisation is so embedded in my head and my writing I don’t have to consciously think of his character traits.

I’m not going to lie: the re-read is as much because I can’t remember what happens. I seem to have a relatively high word count for how much of the plot I have written. I wanted to re-immerse myself in that world, familiarising myself with the layout of the land, the rules of this world and exactly where each character belongs. 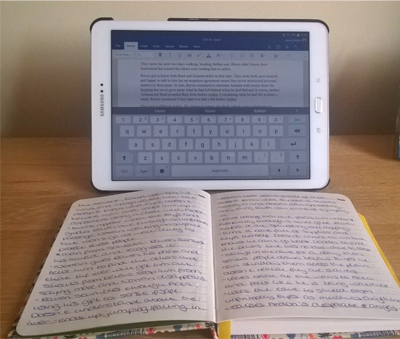 Yes, I have character studies and maps etc to fill in these blanks. But nothing gets them in my head quite as much as seeing them all turn up just in the right place at the right time. If, of course, they do, and I’m not reading it thinking “I don’t remember you being here. Are you supposed to be here? Go away!”

In regards to word counts, no, I have not made any progress. In fact, I’ve gone backwards! But in terms of feeling as if I am moving forward, definitely! If nothing else, the fact that I am spending time on it again is progress enough.

It will be another year of not finishing it. But one step at a time, right?