Synopsis: Return to the world of the Farseers…Robin Hobb’s best loved characters, Fitz , The Fool and Nighteyes the wolf, face new adventures and trials in the first book of The Tawny Man trilogy. When Assassin’s Quest closed, Fitz was living in self-imposed exile. Wracked with pain, he had chosen to discard the magical gifts that had seen him survive the wonders and torments of navigating the legendary city of the Elderlings, and of raising a dragon.

Now, in this the first of a new trilogy, we are returned to the world of the Six Duchies and the lives of those who managed to survive the events of the first Assassin trilogy. Fifteen years have passed and events are about to sweep Fitz out of his quiet backwater life and into the main political current again. Persecution of the Witted has become rampant throughout the Six Duchies despite Queen Kettricken’s effort to damp it. The Witted themselves have begun to strike back.

So when 15 year old Prince Dutiful disappears, is it only because he is nervous about his betrothal ceremony to an Outislander princess, or has he been taken hostage by the Witted? Worse, is he perhaps another ‘Piebald Prince’, a Farseer tainted by Wit magic? As the desperate situation worsens, Kettricken has no choice but to summon Fitz to Buckkeep, for who better to track the young prince down than another gifted with the Wit, together with his bonded companion, the wolf Nighteyes?

It has been two years since I finished the Farseer Trilogy, and I’ve been itching to read more Robin Hobb ever since. Between one thing and another, however, it has taken until now for me to finally start The Tawny Man trilogy.

I was a little bit worried that being so excited to start Fool’s Errand would prevent it from living up to my expectations, but luckily that was not the case.

I regret it has taken me so long to get to it, because this series picks up fifteen years after the last one finished. There are a lot of references and reflections on the events that Fitz looks back on as he tries to piece together a life for himself, one free of adventure and duty and one filled with simple pleasures he can share with Nighteyes.

It was great meeting Fitz again. He’s older, but not necessarily wiser, determined to ignore his heart’s desire to do more with his life and instead focusing on just staying safe. But danger – and destiny – refuses to leave him alone and Fitz is thrust back into the centre of things, unable to resist the calls of those he once called friends and mentors. Only he’s not just looking out for himself and his wolf this time: Fitz has taken on a boy he calls his own and he is determined to provide for Hap.

The truth, I discovered, is a tree that grows as a man gains access to experience. A child sees the acorn of his daily life, but a man looks back on the oak.

The plot is filled with danger, tension and rekindling old friendships. I have to admit that there are several passages where I couldn’t turn the page fast enough and a certain incident towards the end of the book that broke my heart. It was done beautifully though, which made it more moving.

Despite being gripped and the tension become intense, the book is relatively slow-paced. We’re already over 200 pages in before Fitz even leaves his comfortable homestead, and the only thing that has happened up until then is the characters that ultimately play a role in the book have come to visit him as a way of introducing them back to both Fitz and the reader. 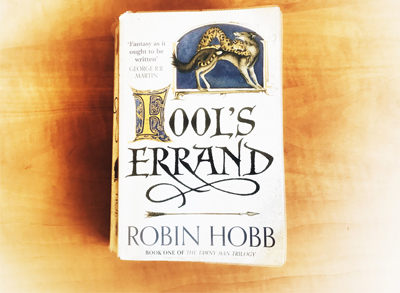 There aren’t many authors that can hold my attention when the book is filled with this much description and reminiscing. Hobb is one of the few who can; her writing just draws me into this world so effectively that I honestly feel like I was there!

What can I say: it’s great being back in this world and I can’t wait for the rest of the series!