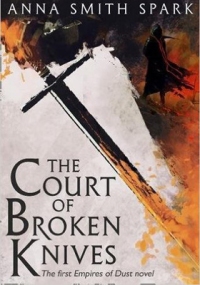 Title: The Court of Broken Knives

Synopsis: They’ve finally looked at the graveyard of our Empire with open eyes. They’re fools and madmen and like the art of war. And their children go hungry while we piss gold and jewels into the dust.

In the richest empire the world has ever known, the city of Sorlost has always stood, eternal and unconquered. But in a city of dreams governed by an imposturous Emperor, decadence has become the true ruler, and has blinded its inhabitants to their vulnerability. The empire is on the verge of invasion – and only one man can see it.

Haunted by dreams of the empire’s demise, Orhan Emmereth has decided to act. On his orders, a company of soldiers cross the desert to reach the city. Once they enter the Palace, they have one mission: kill the Emperor, then all those who remain. Only from ashes can a new empire be built.

The company is a group of good, ordinary soldiers, for whom this is a mission like any other. But the strange boy Marith who walks among them is no ordinary soldier. Marching on Sorlost, Marith thinks he is running away from the past which haunts him. But in the Golden City, his destiny awaits him – beautiful, bloody, and more terrible than anyone could have foreseen. 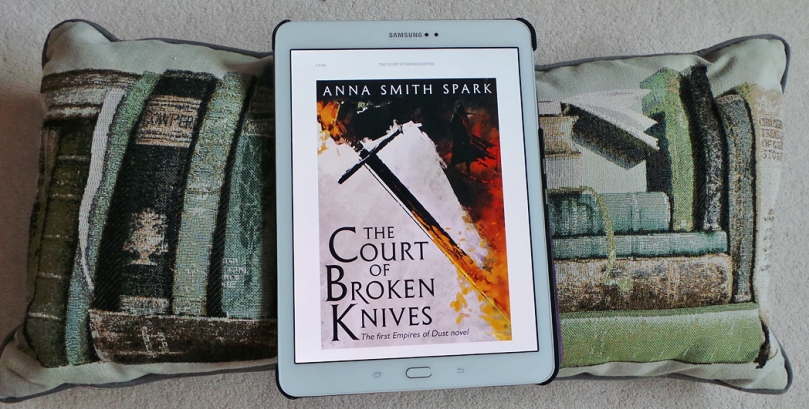 I had high hopes for The Court of Broken Knives: the synopsis sounded like it was my kind of book. Set in a fantastical world, with a power struggle and a few men with dubious pasts having the chance to make a difference.

Unfortunately, it disappointed me.

The pacing felt slow and the tension never climaxed. It remained the same throughout, regardless of whether the characters were walking through a desert, attempting to assassinate an emperor or contemplating their love-life. You never got the feeling you should start worrying.

Violence, without tension, suddenly becomes a really boring read. Towards the end of the book, there is an extremely bloody battle, with characters dying in ways that are far from honourable. It didn’t touch me though; I felt it dragged on for too long and because there were no heightened emotions attached to said fighting, it was just words on a page. Is that harsh?

One of the reasons I had trouble was the changing narrators. There were multiple characters acting as narrators, sometimes with several chapters at a time, sometimes just a couple. There were two separate plotlines happening, with only a single point where they merged. It broke the continuity – just as you got into one, it flipped to the other.

It was the Imperial Palace of the Asekemlene Emperor of Sorlost the Golden, the only mortal man to escape the finality of death. It had stood beyond cities. Beyond empires. Beyond gods. Constant in his life, and in all human lives. It would stand when the waters rose and life ceased and the world was drowned. It couldn’t just burn down.

So he’d better get people going with buckets to stop it before it did.

There was also one character who suddenly told their part from a first-person perspective, compared to the rest, which were third. But her part didn’t remain consistent: not every chapter from her point of view was told in first-person.

My main issue, however, was the characters. I didn’t care about them. Marith has a haunted past, but he does nothing to redeem himself. The book had one moment where, if he had chosen differently, he might have been likeable. But he was nothing more than a drug addict with a lust for violence.

Tobias was a severely underused character – he was prominent when he was needed to move the plot along, then dwindled to nothing. I’m not even entirely sure what happened to him at the end, other than knowing he was around somewhere.

Thalia was a High Priestess, the most powerful woman in the Empire, and other than throwing a few shadows around once or twice, she did nothing but cower. She only stayed with Marith because he was beautiful, which in turn made her a really shallow character.

Even Orhan – his character was the most developed out of all of them and I might go as far as saying I liked him. But I couldn’t connect with him on an emotional level, so I still didn’t really care what happened to him. Once you don’t care about the characters, it needs to be a strong plot to make up for it. This just involved a lot of moving from one place to another, then killing things.

A disappointing read, if I’m honest. More development was needed and the plot should have been faster paced in order to work in a building tension rather than meandering along.

12 thoughts on “Book Review: The Court of Broken Knives by Anna Smith Spark”