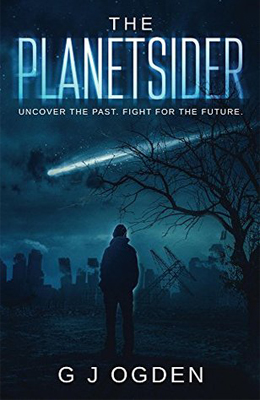 Synopsis: Several generations after ‘The Fall’, the scattered clusters of civilisation that grew in its wake live in ignorance of the past. No-one wants to know what caused such devastation or why. No-one, except Ethan.

Ethan used to believe in the guardians; mysterious lights in the sky that, according to folklore, protect the survivors, so long as you believe in them. But the death of his parents shattered his faith and forged within him a hunger to know more. One night, a light grows brighter in the sky and crashes to the planet’s surface. Ethan then embarks on a heartbreaking journey in which harrowing discoveries unveil the secrets of the past, and place him at the centre of a deadly conflict.

Powerful, thought-provoking and emotionally absorbing, The Planetsider is a gripping, post-apocalyptic thriller that will keep you hooked until the very end.

The Planetsider left me with mixed feelings. After digesting it for a few days, I know I did enjoy it: the dystopian world had been built in a clever way and the plot, ultimately, engaged me because of the complex balance of truth and lies.

My main trouble was that I wasn’t a fan of the characters, their relationships and their development throughout the story and it undermined the plot for me. They had the potential to be more.

I remained engaged throughout the book and the second half was stronger than the first. Hence why I’m going ahead with the review.

I’ll start with the characters.

I loved the introduction to Ewan: rule-breaker but protector, determined to seek out answers while everyone turns a blind eye. I thought he was going to be, well, a cool character. He’s in love with his childhood friend but determined to keep the settlement safe.

But, no matter what you’ve lost, never lose hope. With hope, you’ll find where you belong.

But within less than a day of meeting Maria (who spends half that time unconscious) he forgets about Summer and falls hard and fast for Maria. This development would have worked for me if it took place over a longer period of time than a matter of days. It made Ewan naïve and, in a way, foolish.

He is also selfish, despite claiming near the end of the book that he is acting selflessly. He goes with Maria because he wants to help her, true enough. But towards the end, he refuses to help an entire group of people because he is worried they won’t fit in. It didn’t work for me: Ewan didn’t want the change and so he refuses to help.

You know from the start Maria isn’t being as honest as Ewan thinks; there is more going on than she tells him. Although the characters are aware they are being sexist, the fact they still follow through with it left me frustrated: Maria had the most chance of success just because she could seduce him. Once Ewan had agreed to help, Maria was there as the love interest to motivate him, and very little else. She had far more potential than that.

The characters aside, I found the plot enjoyable. There are three groups of people: one is blissfully unaware of space and the other two are locked in an epic war. Through Ewan’s narration, the reader is left with the feeling there is more than what is on the surface and that draws you in: I wanted to know if Ewan – and my – feeling was right about who was telling the truth.

The pacing was fairly slow for most of the book. When the three different groups come together at the end, however, the increased tension makes the pace pick up and it did turn into quite a page-turner during the final battle. So much was based on Ewan’s feelings that the pace wasn’t given the chance to really move at any given point.

Overall, an enjoyable enough book with a lot of potential.

G J Ogden studied Physics at UMIST, but spent more time writing for and later editing the University magazine, GRIP. This was the stepping stone into the first of his careers in IT journalism. He created and launched Custom PC magazine for Dennis Publishing Ltd, the most successful enthusiast PC magazine in the UK, before later moving into technology PR and marketing. A proud nerd and sci-fi geek, he has had a lifelong love of computers and technology. The Planetsider is his first novel.

Fancy winning yourself a copy of The Planetsider and giving it a go for yourself? Enter our giveaway for your chance!

1st prize: Signed paperback of The Planetsider (UK only)

4 thoughts on “Book Review: The Planetsider by G J Odgen”