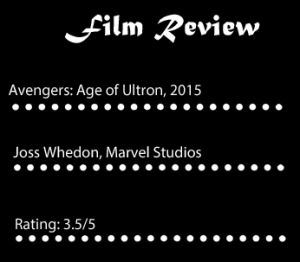 Plot: The world is under threat. Again. Only this time, the Avengers are already working together and no mission to unite the strongest forces on Earth is needed. Just because they are a team doesn’t mean there aren’t issues…and trust is a difficult force to master when all have their own demons.

Quote: `You get hurt, hurt ‘em back. You get killed…walk it off.`

Opinion: Personally, I feel the quote sums up the film. It sums up all of the Marvel films really – how many fights can be packed into one film. But there is something about the Avengers that works for me… Maybe it is just the plot was engaging enough it didn’t feel like one fight from beginning to end.

I’ve wanted to see this film for a while. I’m glad to have finally seen it, for I did enjoy it. I didn’t, however, think it was as good as the first one. I think it is the amount of films that have now been made in this universe… I felt like a lot of character development had taken place in the other films that was then inserted in here and if you’ve missed a film on the way, it’s like you’ve missed some of the plot. It didn’t draw the audience in as an independent film the way the first did.

The plot was big. There was the initial confrontation with the twins. Then there was Ultron. Supposedly the two things come hand in hand, but that was not developed enough. Nor were the twins used to their potential or explored enough. They could have been formidable if given the chance and instead felt like a side-line.

The whole Ultron and Jarvis plot I wasn’t sure on. For me, it took away from the heroes too much and left them just as the muscle who didn’t actually win the day, Jarvis did. But Jarvis had always been an awesome character in the Iron Man films, so because it was a familiar face (well, voice), it worked to some extent.

The acting was as strong as ever. The on-screen chemistry worked to build all of the relationships, not just the budding one between Natasha and Bruce (which is where I really felt like I missed something along the way). The clashes between Steve and Tony in particular are always humorous and break away from the tension of the film.

My overall opinion: I liked it. I wouldn’t want to rave about it, or rush back to watch it again the way I do with the first. I did, however, think it was another strong film in this universe and wouldn’t turn away if given the chance to watch it again.