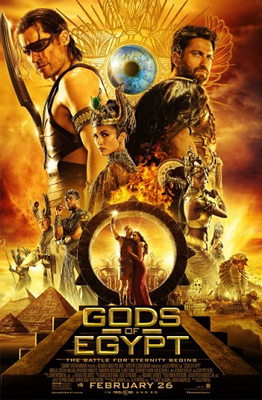 Horace, the rightful king of Egypt, is overthrown by his evil uncle, Set.

For mere mortals, that means a time of slavery and death. When Bec loses the love of his life, he will do anything to bring her back.

Anything, including uniting himself with the fallen Horace to steal back Horace’s eyes (and power) and overthrow Set.

Bec believes gods are fickle, and mortals do not matter to them.

Horace, however, may be different.

If he is not, it is not only Bec’s life on the line, but every mortal in Egypt.

Can Bec trust a god? Should he?

Gods of Egypt was not what I was expecting!

If you think of a giant Jaime Lannister dressed as a god with mortals only coming up to his shoulders, you’re on the right track. Pit him against Gerard Butler and you’re there.

I, however, was thinking something more along the lines of Troy. Possibly because of Gerard Butler and films like 300.

It was far more light-hearted and entertaining than that, thank goodness. Once I got used to the style of the film, I thoroughly enjoyed it.

The characters were all well-developed and went on their journeys to become better, the plot consisted of the traditional good v evil and the dialogue was highly entertaining.

The plot was a classic fight against evil to restore the rightful king – nothing new there. What made this film worth it were the special effects. There were some highly impressive visuals that made watching pure enjoyment.

At the same time, the story constantly moved forward – there were never any effects just for the sake of them, which made a nice change.

The characters were well developed with their definite flaws and their clear journey to develop as the film progresses. Horace must learn humility while Bec must learn to have a little faith in those around him. The two had a good dynamic and the dialogue between the two made the film highly enjoyable.

Nikolaj Coster-Walday was perfect for the arrogant Horace while Gerard Butler’s brooding side was ideal for Set. I haven’t come across Brenton Thwaites, but he showed Bec’s faith in love and hope in a heartfelt manner that helped me connect to the character.

I’m not going to lie – the film was a cliché in more than one way and it wasn’t anything I hadn’t seen before. It was refreshing to see a film blend effects with plot and to keep the audience enjoying it from beginning to end. On so many occasions recently I’ve grown bored in fight scenes and lost interest.

If you’re looking for the next blockbuster, this isn’t the right film for you. If you are after an evening of entertainment with laugh out loud moments and a clear good v evil plot, this is a good choice.